Setting the table for breakfast

There is a wide range of different kinds of breakfast and everything is possible, from a cup of coffee with a little cake to a major meal. A breakfast setting consists of a dessert plate, a cup and saucer, a knife, a coffee spoon, possibly a fork, and a serviette.

Firstly, the dessert plate is laid. Each plate is placed about 1 cm (or a thumb's width) from the edge of the table. In the case of rectangular tables the plates should be aligned next to each other. There are two possible forms for placements opposite each other. In the first case, the plates are laid opposite each other (→ Figure), and, in the other, the place settings (→ Figure). Following the dessert plates, the cups and saucers are laid. In this case, the upper edge of the saucer should be aligned with the upper edge of the plate, although, in some households, the cup and saucer may also be laid a little higher.

The knife is placed on an imaginary line about 1cm (or a thumb's width) from the edge of the table to the right next to the dessert plate. However, you may also place it on the plate in combination with a serviette. The teaspoon is laid next to the cup with its handle parallel to the handle of the cup. Finally, the serviettes are either placed upright or laid down. 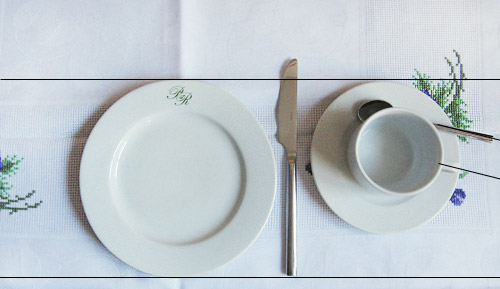 This is most commonly known in Great Britain Here, a cup of tea is drunk before breakfast in the morning between 6am and 7am. In certain cases, some pastries are served in addition. In Great Britain many hotels provide a kettle with which guests can prepare tea themselves.

This, for example, is practised in France. It consists of coffee (sometimes also tea) and a breakfast pastry, such as a brioche or croissant with butter.

Porridge is also eaten at breakfast in other countries, such as, for example, in Sweden where there is "Havregrynsgröt" (porridge oats) which is eaten with a spoonful of strawberry or cranberry preserve or with apple sauce. A further variant is semolina (Mannagrynsgröt) with apple sauce.

Increasingly frequently breakfast is served in the form of a buffet so that guests can choose between the dishes which are provided.

This is a combination of breakfast (breakfast) and lunch (lunch) and takes places generally between 11am and 2pm. As the name suggests, breakfast and lunch are combined here into one single meal.